It’s been a little while since I wrote something non-travel related and got a bit more intimate and personal with my writings, so here goes.

12.03.2020. The day that my world stopped and so did my Grandpa’s heart. The day that a part of my heart shattered beyond repair. It’s been 2 months and 5 days.

Growing up I was fortunate enough to know all 4 of my grandparents, something I know not everyone gets the experience of having. I was even luckier that they were all relatively fit and healthy for so many years of my life and that, up until now, I hadn’t had to grieve any of them. 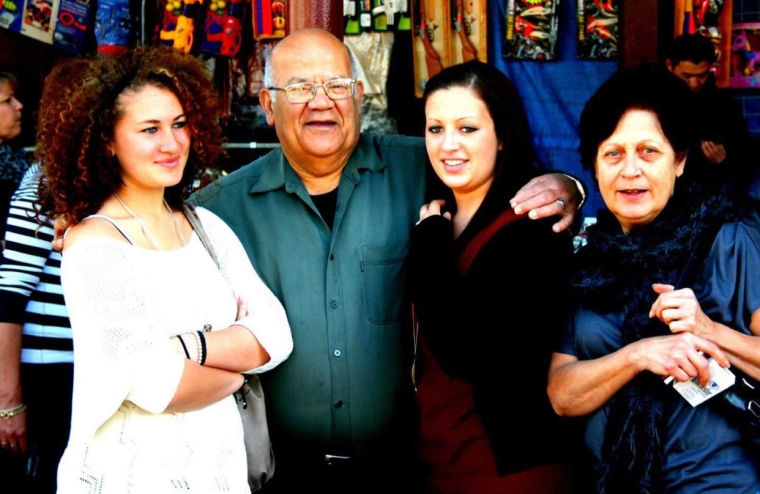 I’ve also been lucky in the sense that I haven’t lost anyone extremely close to me before and therefore haven’t really experienced the true feelings caused by grief.

In 2012 a lot of people I knew directly or indirectly passed away; old school friends, family friends, friends’ family members. That was my first real experience of how death can affect you.

Nothing could prepare me for losing my Grandpa though.

For the last 20 years my Grandpa was fighting an on and off battle with cancer, but I always thought that he’d be the superhero that recovered from it each and every time, and he’d be around forever.

In August 2019 we found out that my Grandma has MND (motor neurone disease) and that we should be preparing ourselves to say goodbye to her within the next 18 months roughly.

So when I got a text on Tuesday 3 March 2020 from my mum telling me I needed to ring her as soon as possible my heart dropped expecting to hear bad news about my Grandma. I was in no way prepared to hear that it wasn’t about my Grandma at all, but rather my Grandpa; more specifically, we should brace ourselves to say goodbye to him in the next week.

How can it be that less than a month prior my Grandpa was doing working bees around their garden with the whole family, and the thought of losing him was not even a thought.

I’m not sure what’s worse, losing someone unexpectedly and never having the chance to say goodbye or knowing you’re going to lose someone and saying goodbye every day in case it happens then.

I was alone when I got the news and my only reaction was to ball my eyes out (I’m sure my neighbours would have thought I was being beaten or fallen down the stairs with how loud the crying was). I knew I couldn’t just sit at home and wallow in my tears though, so I went straight to the gym and smashed out the best F45 weights session I had in a very long time and then headed straight to the beach for an ocean swim – it was freezing, but anything to momentarily numb the pain I was feeling.

There were a mere 9 days between when I got that phone call and when my Grandpa took his last breathe. I had 9 days to brace for it, but honestly I was no where near prepared for it. My final words to him were “I’ll see you later,” as I truly believed he’d make it for one more day and I’d see him tomorrow. 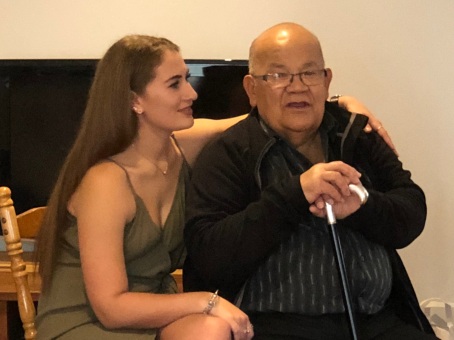 And then COVID hit. It threw a spanner in the works for the funeral; only a certain number were allowed to attend, and even then many were becoming fearful of the virus. It wasn’t the massive send off that I hoped my Grandpa (who was well and truly loved by every single person he met) would get, but nonetheless it was a send off and I’m grateful we were allowed to  have one – as I know many people have missed out on the opportunity to have one for their fellow family and friends during these times due to restrictions. 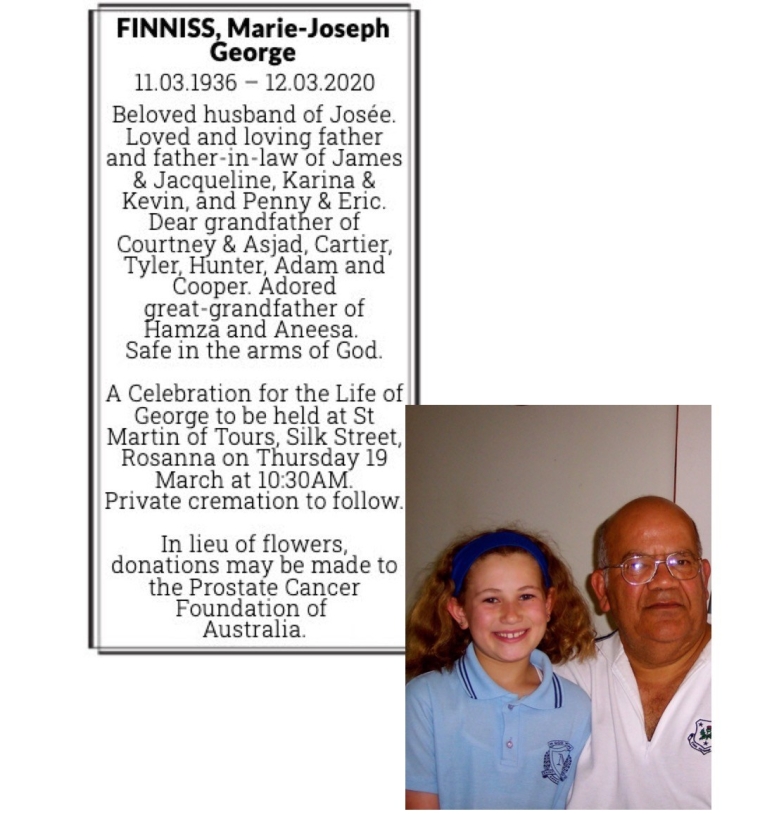 Leading up to the funeral, I was told that as sad as they are, funerals are super important in the process of saying goodbye and grieving.

Speaking at the funeral was probably one of the hardest things I’ve ever done to date; I struggled to get the words of my speech out without choking on tears, and carrying Grandpa’s coffin out with the other grandchildren was just as hard.

I thought I’d feel better after the funeral, after getting to say our final farewells and celebrate his life. And I did, momentarily. But now, I’m filled with a rollercoaster of changing emotions that I’m still learning how to control. Some days I’m mad at everyone and everything – mad at the world for taking someone that meant so much to me – other days I’m sad beyond words and the tears are endless, and on the rare occasion I find the courage to laugh at certain memories I have. 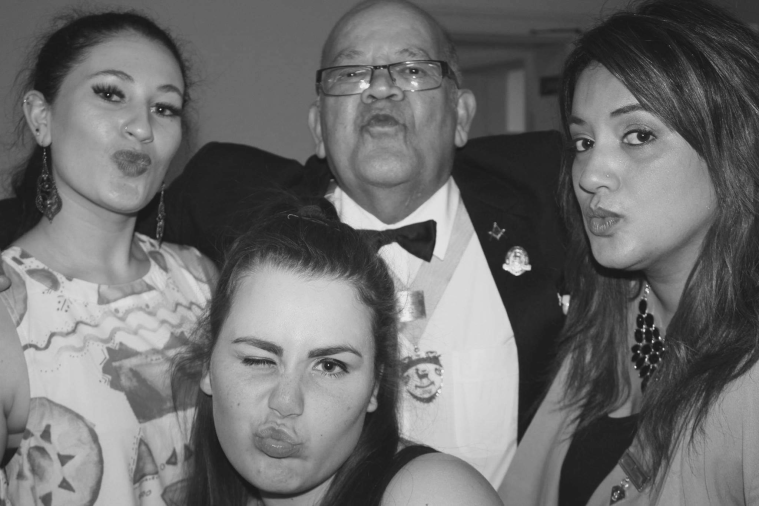 I’m still coming to terms with the fact that I’ll never get one of his big squeezes again, or be able to just call him up to tell him my news. There are so many life milestones that I won’t get to have my grandpa around for now, but I hope that he’s proud of whatever I do in life.

It’s hard not to think about all the times that I should have visited him but didn’t, or the things I wish I’d said but can’t now. Maybe with time I will learn to let go of the what if’s and instead cherish what I did have.

And that’s the thing isn’t it, time. It’s this thing we’re all given but never really appreciate until it’s too late.

The funny thing is, we all know that we’re going to have to say goodbye to our grandparents at some stage – as much as we wish they could, they can’t live forever – so you’d think that we’d be better prepared for when that day comes.

There’s no pause button either. Eventually you have to go back to your life, work included.

While all of this was going on with Grandpa I had taken the week off work, so understandably when I returned members at the gym questioned where’d I’d been. These are people that outside of work, don’t actually know anything about my personal life, so how could I expect them to know that I’d lost someone very close to me. Still, it was hard not to get angry or upset when person after person was asking me where I’d been and time and time again I had to say “my grandpa died” then comes the awkward silence from them not knowing what to say back.

The thing about grief is that while your heart is aching, the world goes on around you. You may be in an undeniable amount of pain but your friends and people in your life are going on about their daily lives as though nothing has happened – and it hasn’t for them at least.

Death is inevitable, for everyone. You never know when it’s coming but you know it will happen one day, so why do we make so many excuses not to do the things that we want to do?

If there’s one thing that my Grandpa’s passing has taught me, it’s to not wait. One of my biggest fears is getting to my 80s or 90s and thinking “I wish I’d done that.”

Unfortunately for me, a lot of the things I want to do (check out my Before 30 bucket list here) are travel related and good old COVID-19 has made them a little bit more challenging to do right now. Having said that, when all the restrictions are lifted and we’re allowed to resume day to day life, I’m definitely going to stop saying “I’ll do it when….” and just go for it instead.

My Grandpa was my biggest supporter; when it came to my candle business he used to go into shops and ask them if they would sell my candles, he would comment on every social media post I put up of my candles, and he’d always ask me how it was going every time I saw him. 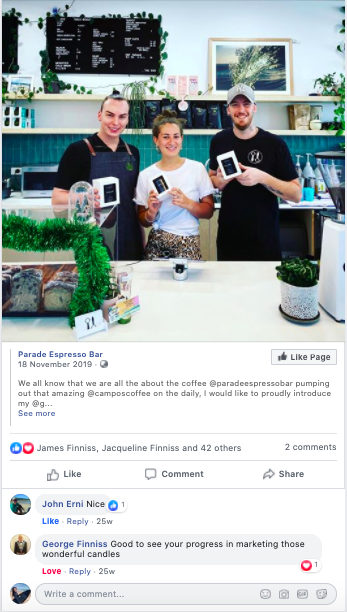 It’s been 2 months and 5 days. A part of my heart is still missing and will never return. I haven’t quite harnessed the feelings of grief or learnt how to ride the wave of them – so if you catch me on a bad day, just be patient with me. And if you catch me talking about the things I want to do but am making excuses as to why I can’t right now, please give me a gentle nudge to just go and do the goddam thing!

So go on, hug your loved ones for a little longer today, call up that person you’ve been thinking of just to say hello, and tick off that bucket list item before it’s too late.

At the funeral, in lieu of flowers we asked that people donate to the Prostate Cancer Foundation of Australia instead; if you’re looking for a good deed to do today, a donation to the foundation would go a long way in helping research and support those suffering with prostate cancer.