If you haven’t already gathered from reading the ‘about’ section or knowing me personally, I haven’t always lived in Australia. In 2005 my family and I relocated to Nairobi, Kenya where I spent the following 8 years.

Moving countries is a whole other story that you can read about here.

It’s really hard to put into words what the experience of growing up in Kenya was like for me, but I’ll do my best to give you an insight into it all.

For those contemplating Googling where Kenya is, it’s in Africa.

Africa is not a country. Contrary to many people’s beliefs Africa is in fact made up of multiple countries, therefore making Africa a continent.

An additional assumption I have encountered countless times is the notion that the only place I could have possibly lived in Africa was South Africa. Wrong.

One of the top questions I would frequently, and still get asked, when I tell people I grew up in Africa is the immediate response “South Africa yeah?” Honestly I cannot count the number of times this has been said to me, and for someone who has lived and explored multiple countries in Africa it frustrates me slightly because I feel every other country goes unseen and becomes underrated by people’s immediate instincts to think that South Africa is the only liveable country in Africa.

My point is; for people moving to Africa be prepared to have this constantly asked to you, and for those of you who find yourself speaking to someone who says they are from/live/grew up in Africa do NOT automatically assume that it is South Africa.

On a similar note, don’t be like Karen from Mean Girls and ask “if you’re from Africa why are you white?” We might laugh it off with you, but at the end of the day it’s not funny so just don’t say it. (And yes I have actually had this said to me multiple times).

The most memorable question I have ever been asked was when I returned to Australia for the first time for a holiday after moving away. It was “do you live in a mud hut and have school outside with lions and stuff roaming around you?” Seriously. You have obviously watched Lion King one too many times. The sad thing is that this person was, for most of the part, completely serious when asking me.

Contrary to the feature image of the article, Kenya, and Africa in general, surprisingly, does not merely consist of mud huts, wild animals and no civilisation. Nairobi itself is incredibly built up; it has sky scrappers in the city just like Melbourne, shopping malls like developed countries, and (surprise!) buildings at school.

Growing up in Kenya, aside from being a completely different place to my well-known Australia, had so many perks to it. From abundant travel opportunities, to broadening and expanding my knowledge, it was an experience I would not trade for anything.

One of the main things I quickly learnt from being in a country like Kenya was that as a child you mature and grow up much quicker.

When I lived in Australia as a kid I seldom encountered things such as homeless people (looking back on it, I remember the first time I saw a homeless person; I was 7, visiting Sydney and it honestly felt so strange to see it as it was something completely new to me), or unsafe scenarios. In Kenya I frequently saw myself encountering these things, and more importantly I found myself being more aware of my presence and surroundings.

My primary school (Braeburn) bordered a slum so seeing people living in conditions incredibly different to what I had lived in or was used to was, at first, shocking. I wasn’t quite sure how I would cope seeing such a thing on a regular basis, but it was something I just had to adjust to and, I feel, made me quickly mature and become a whole lot more grateful for all the things I have. I’ve never been much of a materialistic person anyway, but this experience opened up my eyes to how much materialism affects the developed world. 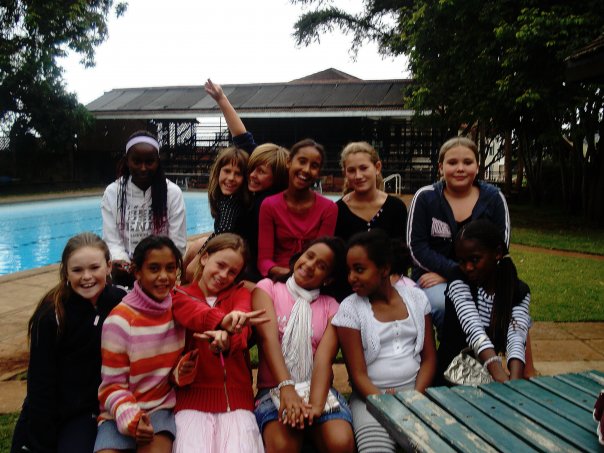 Aside from the standard differences, such as seeing poverty stricken areas, the other thing that quickly became apparent to me was the idea of danger. As a kid in Melbourne, danger to me was riding my bike on the road or getting lost in the supermarket. Without scaring you off too much, it is a completely different scenario in Kenya, not massively but there is a noticeable difference. It becomes habit to lock your car doors when you’re driving; if you decide to walk anywhere you’re fully aware of your surroundings, things like these.

Without boring you too much with the things that are different, let’s delve into why growing up in Kenya was one of the best experiences I’ve had.

The opportunity for unique experiences is endless.

My first NYE in Kenya saw my family and I welcoming in the New Year around a campfire in the middle of a safari park.

A year 8 holiday expedition saw me climb the summit of Mount Kenya.

A regular holiday for my family and me consisted of booking an entire island just for us and friends on Lake Baringo.

The friendships I made during my time in Kenya are ones that will last a lifetime, with many having developed into being more like family than just friends.

I can’t say I’ve met too many other people who have had the same unique experiences as I have.

On another level, the experience of  growing up in Kenya taught me so many things.

↠ To appreciate the small things in life,

Kenya, and Africa as a whole, does not run on your usual clock. There is such a thing as African timing and it will definitely test your patience to begin with, but after a while you begin to get used to it and it just becomes another thing on the quirky list of traits Africa possesses.

During my time in Kenya I encountered expats from every corner of the globe, to the various tribes present in Kenya, it really opened my eyes up to the different cultures and traditions, and most importantly to respect and admire such cultures.

As I previously mentioned, I’ve never been big on the materialistic items, but growing up in Kenya really taught me to appreciate more than the tangible aspects in life. Happiness, memories, moments that will last a lifetime, friendships, those are the things worth holding onto and really worth chasing.

If you asked me to pick my favourite thing about having grown up in Kenya there is absolutely no way I would be able to name only one.

↠ The nightlife in Kenya is my favourite, so far, any where in the world.

↠ The endless opportunities means there is never a boring day.

↠ It has given me the most unique background story.

↠ The memories I made are ones that I will cherish forever and always.

↠ The notion that it has made me the person I am today.

Despite having left the country 3 years ago, it will always remain as a home to me and, whenever the opportunity arises, I will go back as often as I can taking as many people as I can so that they too can experience the greatness of Kenya (Kenya has it all; coasts, safari parks, city centres).

Having lived in various countries and seeing the way others have grown up, without being rude, I definitely come out on the winning side. There are plenty of people, both those I know as well as random kids I’ve passed on the streets, that I think would benefit from the culture shock and to assist their attitude.

My tip to anyone considering relocating their family, whether it is to a developing country or some where completely opposite to where they are now, would be DO IT. Your children will be some of the luckiest kids in the world, and the experience will play a vital part in helping your child mature, grow and be more appreciative of the world.

Have you had a unique upbringing? I’d love to hear your stories so leave me a comment below!

4 thoughts on “Growing up in Kenya”